The Royal Academy of London calls it the "Secret Postcard Event", Artworks of Cincinnati calls it "Secret Artworks", and The Arts Council of Moore County calls it "Anonymous Art". The Cleveland County Arts Council in Shelby, North Carolina calls it
"Mystery Art"
~ An art "Whodunnit" of miniature proportions~
This is the second year that I have participated in the Mystery Art Show and Sale. It is always so much fun. There are 200 paintings included in the event. They are all painted on 5"x 7" gallery wrapped canvas. These small creations are hung anonymously in the gallery and the identity of the artist is given to the purchaser of the painting. All paintings are available for $35.00 with the proceeds going to the Cleveland County Arts Council. Come and join in the fun at the opening reception April 29, 2010 from 5:30 through 8:30 pm. Come early~ the paintings sell quickly.
This year, I painted small versions of some of my favorite pear paintings and "best sellers". 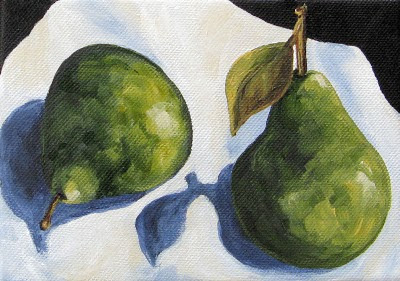 This is a smaller version of the painting that hangs in my kitchen.
I have painted this composition several times. The paintings are in collections in the United States and Australia. 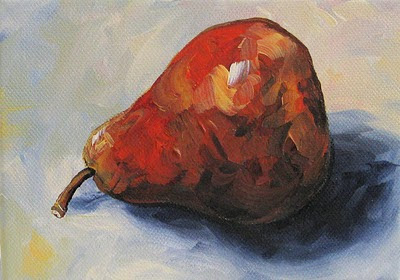 This is the third version of "The Lazy Pear" painting titled: 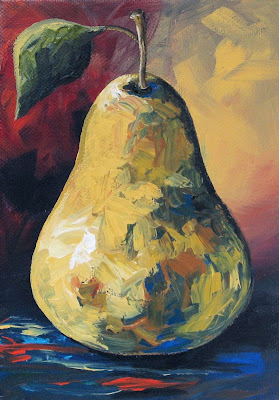 The number nine says it all~ The brightly colored, loosely painted pear is a collector favorite. I included a version of this painting in last year's sale.

I am very honored to have been allowed to participate in this charity event to support the Cleveland County Arts Council in Shelby, NC. I moved to Charlotte at the first of this year, but still try to help out whenever I can. I publicly showed my first painting at the Council's Artist Competition in 2001, so there is a soft spot in my heart for the Council.

Look forward to seeing you there~ 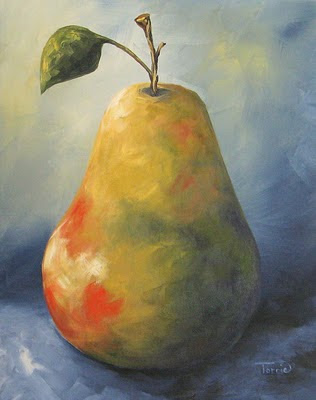 The Pear - 2010
16" x 20"
Acrylic on Gallery Wrapped Canvas
~Sold~
The Pear - 2010 is the first large pear painting of this year. A brightly colored pear with a muted background.
The Olive Pear was painted using basically three colors. The dark color which is a mix of Ultramarine Blue and Cadmium Orange. This dark color is then used with only Naples yellow and Unbleached Titanium. This is the result--I call it The Olive Pear~
Both paintings were painted using professional artist grade acrylic paint on a gallery wrapped museum quality canvas with painted sides. Paintings were finished with a light coat of varnish.
Thanks for stopping by,
Torrie
www.torriesmiley.com
www.torriesmiley.blogspot.com
Posted by Torrie Smiley at 10:25 PM 2 comments: 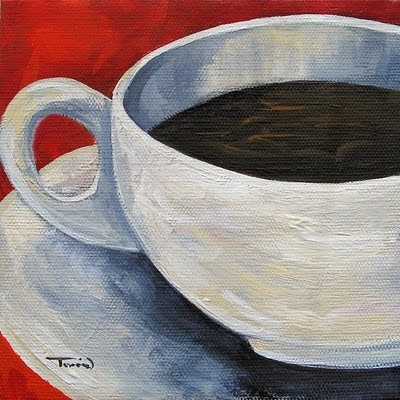 A fresh, hot cup of coffee in a white ceramic cup on a bright red background.

Coffee on Red was painted using professional artist grade acrylic paint on a gallery wrapped museum quality canvas with painted sides to allow for hanging without a frame. Painting can also be placed on a small display easel. Painting was finished with a light coat of varnish.

This painting has sold. To see more paintings currently available for purchase, please visit my website or my Etsy.com store.

There are so many paintings floating in my head that need to get on canvas! The weather is beautiful and everything is blooming. It is very inspiring. The series "Paintings from the Porch" is currently on hold until the green/yellow mist of floating pollen eases up just a bit.

I am currently finishing up the two lily pond paintings. Half finished and waiting for my undivided attention are two large ballerina paintings and a large pear painting. Look for posts on these paintings in the coming days~

Thanks for stopping by,

Posted by Torrie Smiley at 8:26 PM No comments: 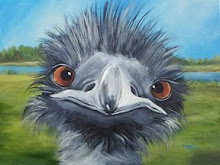 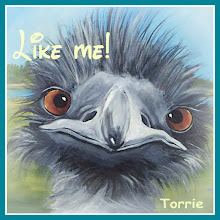